Just a moment ago, I booked our flights to go to WWDC in June. Sitting there staring at the massive amount of money that’s just been added to my total debt1, I realised just how much time I’ll be spending on one of these this year: 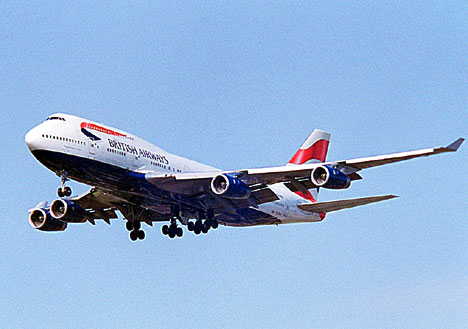 Note to plane nerds: I don’t know if that’s actually the exact model of plane I’ll be flying on.

In June, I’m flying to San Francisco and back, which is approximately 5,500 miles each way. In December I’m flying to Perth and back to see my family for Christmas, which is about 9,500 miles each way. So, assuming that the planes fly in fairly straight lines to their destinations (which I’m well aware that they don’t), I’ll be flying approximately 30,000 miles this year! To show this small feat, allow me to present a map: 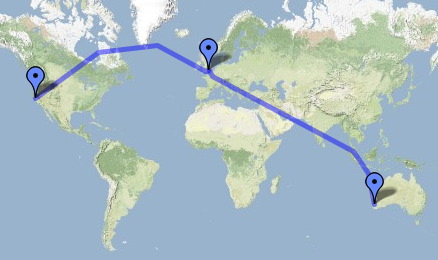 It’d actually be less distance to fly around the world from London to America to Australia and back to London! Normally, I’d be exited about this. And this time is no different - I had an amazing time in San Francisco and California last time I was there, which I documented really quite concisely.

San Francisco is an amazing city, and there’s something about being in a brand new place halfway around the world all on your own that’s somehow empowering - it’s hard to describe. However, I’m a little worried that this time it won’t be as amazing because I’ll have been there before and I won’t be alone. Obviously it’ll be more fun with someone there, but I’m a loner at heart, and savour the rare opportunity to disappear from daily life for a while. Big groups of people don’t appeal to me. Sure, it’s nice to see friends and family (especially when you haven’t seen them for a long time), so on the Australia trip I’ll stick with the family group and have fun - genuine fun - even though if I went on my own I’d be doing something completely different.

It’s the same with everything in my life really - given the choice between groups and one-to-one meetings, I’ll go one-to-one more often than not. In a group, you just have some people. One-to-one, especially if you’re close to that person, you get something different. Suddenly that moment of silence speaks just as much as the sentence preceding it, or answers the question that bit more succinctly. These days people tend to think that you only get that sort of thing in relationships that also (or will) include physical intimacy, but they’re very wrong. Perhaps I’m like this on purpose.

Subconsciously, my mind is making me become fairly quiet because all around me people seem to be just sharing information as soon as it pops into their minds. I really don’t get people who constantly text or talk online - the only way you can constantly talk to someone for that amount of time is to share mind-numbingly useless information. Who the hell cares if I saw a green car that looked like my friend’s green car today? Or that I had beef for lunch? Actually, this isn’t subconscious - it’s an active annoyance of mine. Plus, you need to think of the quality dilution of the information. Sure, I could’ve text my girlfriend with “lol, Tim just fell off his bike” seconds after he walloped me round the skull with his boots, but then that’s that story told and the surprise lost. Instead, I waited until I saw her and told the story in person - and she and I enjoyed it much more that way.

One day, I’m going to go away - on my own - to somewhere amazing. Don’t know where, and I don’t care at the moment. I’ll switch off my phone and my computer for a week and sit on a rock, a bench, a log, or something else with my camera and watch the world go by while thinking about the world go by. Everyone I know will either be annoyed that I didn’t take them or will worry and wonder about my sanity, my health, my emotional status - much as they seem to every time I do something alone or keep a thought to myself.

At the same time I’ll still be sitting there, this time trying to imagine why that man is carrying a bundle of sticks, and what he’s going to do with them. I’ll return with beautiful photos of normal things. And, while it’ll frustrate me a bit that nobody else will understand why that photo of an old man carrying some sticks is so meaningful, most of me will sing.