A few weeks ago, I gave a talk at a Stockholm Cocoaheads meeting about being an “indie” developer. Rather than talking about programming, I talked about the lifestyle and what it’s like to live under this model, eventually concluding that although it can be tough at times, the tradeoffs are very much worth it if you can stomach the pitfalls of a life without guaranteed fixed income. 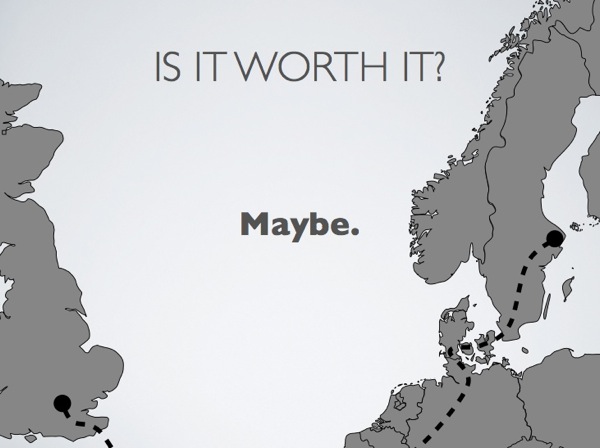 You can download the slides from the talk here.

As of February 7th, 2011, I will no longer be an independent developer — I’m joining the great team at Spotify here in Stockholm. For the two of you on Earth who aren’t aware of Spotify, their tagline sums it up nicely: “All the music, all the time”. They run a music streaming service with the idea that you can listen to whatever you want whenever and wherever you want to. It’s a great service which I’ve been using for a long time, and I’m really excited to be able to help make it better.

I’m aware that this change is the opposite of what many think is the ideal path. The idea is to work for “the man” for a few years while slowly building up ideas and projects in your spare time, before quitting and making a break for it as an independent developer. So, why give up a successful independent software business and go work one someone else’s product?

Well, the last couple of years have been tough, for sure. However, I’ve gone through the worst and am pretty much out the other side. The main problem here is that I suck at running a business. Like, really suck. I hate it. I want to be coding, not dealing with payroll and VAT and corporation tax and so on.

Still, everything is looking up and I came to Sweden with the idea of carrying on with it, and possibly incorporating in Sweden down the line if we decided to stay.

Then, at the Cocoaheads meeting I mentioned above, I got chatting with a guy from Spotify and how they were looking for more developers. After a little while, we agreed to meet up at Spotify HQ for an informal chat (which I later learned was actually my first interview), after which I was invited back a second time for a “more formal” interview.

At this point, I realised that I needed to sit down and figure out what I wanted to do, since it wouldn’t be fair to go back knowing that I’d never take a position because of my indie work. So, I sat down with my fiancée and talked it out — what it’d mean for us, if we would be happy to stay in Sweden long-term, and so on. Eventually, it boiled down to one question:

In ten years, which decision could I most regret taking?

This was fairly easy. I know I have the skills to be an indie developer, even if I hate certain aspects of it. I did it once, and I can do it again. If working at Spotify turns out to be the wrong decision, I can leave and start again.

However, what if I turn down a position at Spotify? This could be the only chance I’ll ever get, and I’d never know what I missed out on.

So, I went to my “more formal” interview confident that I was interested in a position at Spotify. It went well, until they asked a very academic question that could’ve been on a computer science exam paper. I completely blanked — the question was on Complexity, and while I did it at university and have practical knowledge of implementing algorithms and optimising them, I’ve pretty much lost the ability to express the complexity of an algorithm as a function. I managed to muddle my way through, showing my working and how I’d implement the algorithm, but couldn’t answer their question.

When I left, I was crushed — surprisingly so. This told me that deep down, I really wanted to work at Spotify, but unfortunately I’d just blown it. Rather upset, I headed home, confident that I wouldn’t be hearing back. I guess the fact that I’d been discussing it so much with my fiancée, and that I’d pretty much decided I’d take the position if it was offered set me up for a big fall.

A couple of weeks later, an email arrived. Spotify wanted to bring me back for two more interviews! They wouldn’t want to tell me how much I sucked twice, would they? This must be a positive thing! The rest was history, and I start in a couple of weeks.

What about your existing projects?

Music Rescue will continue to be available. It works just fine, and I’ll keep it that way. The in-progress major rewrite will be scrapped, and in the next week or so I’ll release an update (version 4.2) that’ll bring some of the completed under-the-hood changes planned for version 5.0, including a rewritten (faster!) copy engine, simplified licensing, playlist folders, etc.

Clarus will continue in my spare time as a labour of love.

Teleport: AddOns will be finished, released and will continue in my spare time as a labour of love. It’ll also be free. Hooray!

Open Source and Minor Projects will continue to exist but only worked on in my spare time.

So, wait, does that mean you’ll be staying in Sweden forever?

Who knows what the future will bring? For now, though, yes.

So my friend and I started this awesome band. We’re gonna be the next, like, JLS, you know? JLS but ironic. Can you get us on Spotify?

Can you get me free stuff/subscriptions?

I think I have a couple of Spotify stickers somewhere. Other than that, unfortunately not.

That isn’t a question, but yes.

You’re really going to stay in Sweden? It’s SO COLD.

Sweden is awesome. In fact, before I even learned that Spotify needed developers, I was looking for reasons to stay longer than 18 months. It isn’t as expensive to live here as I was led to believe, either.