A few months ago, I was in perhaps the worst state I’ve been in for a few years. I could see my company’s cashflow falling, and expenses rising. I’m not a numbers and charts kinda guy, but I made a chart plotting the projected cashflow against projected expenses and the chart didn’t paint a pretty picture. Many a sleepless night passed as I figured out what on earth I was going to do.

Eventually I decided that it was time to man the fuck up, admit the mistakes I’d made and what to do about them. So, here we go…

Now, I’m happy to hold my hands up and admit I made a mistake. Several of them, in fact. In my book, what defines someone isn’t what they get right, it’s how they deal with what they get wrong. So, I sat down and came up with a plan. Next, I phoned up my bank manager and organised a meeting, told him that I’d fucked up and showed him what I planned to do. He seemed to respect my approach and gave me the freedom to execute it.

Unfortunately, my plan comes at great personal sacrifice. In the past month, I’ve been paid a total of £700 from my company. That, as you may guess, doesn’t even come close to paying my mortgage and bills. For a week, my girlfriend had to pay for my lunch every day and fill up the car with fuel so I could drive to work because I couldn’t afford either. More of less every single creditor of mine has received a phone call telling them they won’t be getting their money this month or next because I’ve had a 70% pay cut since this time two years ago.

Just pause and imagine that situation for a moment. You’re earning a decent salary, and use that salary to establish a home and a life. Then, it gets cut by 70%.

Now, picture this: It’s roughly 9pm and you’re still at work. Everyone else left four hours ago. You’ve just finished a Chinese meal, and you’re dancing around the office to I Love College by Asher Roth. After the song, you return to the computer with a grin on your face and carry on coding, excited to be so deepy engrossed in the flow of whatever it is you’re doing.

Both of those situations describe my life on Monday, 27th April, 2009. They don’t really match, do they? If real life matches Hollywood, and it totally does, I should have been sitting in some dingy bar drowning my sorrows.

When the three viable options are to either 1) cut my losses and sell all my shit, 2) abandon my company or 3) win the lottery, why am I at work at 9pm dancing around like an idiot and having fun?

Well, I’m passionate about what I do. Not “I work eight hours overtime a week” passionate ((Although, that is technically true)), but unconditionally passionate. I live for what I do. It’s what defines me. Not how much money I earn, or what car I drive, or how fit I am. I can say with 100% certainty that I would rather live in a box with a MacBook than give up what I do - as long as I can write code, I’ll be happy.

Unfortunately, most of the people I know don’t understand that. They look at the fact I’m up until gone midnight on a Friday night as either sad or laughable. Conversely, I’m upset that they’ve never been passionate enough about something to understand. Some think they’re passionate, but they’re wrong. Simple rule of thumb: If you leave your work at work, or wish you could, then you’re not passionate about what you do.

The Root Of The Problem

The root of the problem is that I’m so obsessively lost in my passion for what I do, I’m neglecting the fact I have a business to run. My bank manager summed it up quite succinctly, after listening to me go on about how I spent two weeks making my program’s help system beautiful and smart instead of just writing it all in a HTML page. He said: “You work like an artist. That’s rare in your area of work and is by no means a bad thing, but unfortunately your cashflow looks like that of an artist as well.”

If I was working on my own, this would be fine as my cashflow, even at this current low, is enough to sustain me. However, I have staff and bills to pay, and they come first. Always.

So, allow me to introduce the “Businessman Hat”. Once a month, every month, I have to put this hat on and remove myself from my world. I need to look at the figures for the company and make sure I know exactly where every penny in comes from, and where every penny out goes. I have to make predictions for the month. If they aren’t met, why not? If they’re beaten, why? I need to do business-y things like establish trends and… stuff. If things aren’t going well, I need to ensure that the Businessman Hat stays on until they’re fixed. 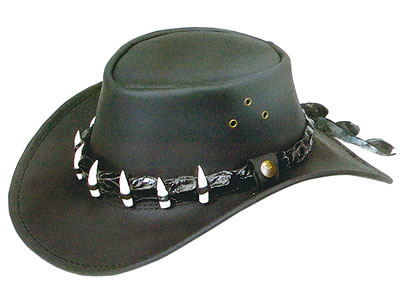 The Businessman Hat. Similarities to Crocodile Dundee’s hat have been noted.

When I first started my company, it was very successful. I was earning a wage much higher than the average for my age, and the company was turning a good profit even after the bills, wages and my salary. However, as I got more and more passionate about what I was doing, the mechanics of running a company got neglected and now I’m paying the price.

Well, lesson learned - definitely the hard way. If you’re so passionate about your craft that you forget you’re running a business, you’ll fail. If you’re not passionate about what you’re doing in your business, you’ll fail. The trick is finding the sweet spot in between, which is the hardest thing you’ll ever have to do. With the Businessman Hat, I think I’m nearly there.