I'm convinced that my company's file has never been quite right in the HMRC's system(s). Every new financial year I have to phone up and pester them to get new forms and stuff, even though I'm supposed to get them automatically.

Now, I have no doubt. It's no secret that I went through a rather rocky patch which I'm now working my way out of. At the time, the company couldn't pay its outstanding tax liabilities since that money had gone to keeping a roof over my head. So, I phoned up the HMRC and asked if it could be paid in instalments. They weren't that keen on the idea, until I pointed out that as the money-making asset of the company is intellectual property, if they demanded the entire amount the company would go bankrupt and all they'd get is a few desks and a couple of computers.

Suddenly, they were all for the idea! So, we set up a weekly direct debit and since that day the company has been paying its weekly installments without fail.

Fast-forward a while to early October, and I get an email from a worried accountant. He'd received this letter for the company from the HMRC. 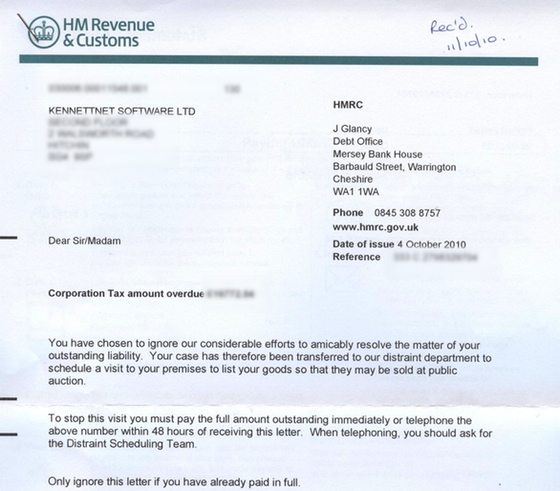 So, as far as they're concerned, I've been ignoring their efforts to amicably resolve the matter. Y'know, except that week where I was talking to the person dealing with my case on a daily basis while we figured out exactly how much the company could pay without crippling the business, then getting that amount signed off by the higher-ups? The signed contract I have between my company and the HMRC over the liability they're talking about? It doesn't exist!

Oh, and that money the company has been paying on a weekly basis without fail? Yeah, it would seem that's going into a black hole. Lovely. Assuming they haven't lost it, the liability should be around 25% gone by now.

My accountant phoned up HMRC, and they were less than helpful — they said that the visit would go ahead regardless. You know what? I hope they go over there. They can take the desks and plants that are there, then I can let the national press rip them to shreds for winding up a business that's sticking 100% to an agreement in place for a liability they're winding the business up for.

Oh, and the best thing? That money the company hasn't been paying? Last week, they took it twice.

I'm really running out of patience now. I'm happy to pay my tax liabilities, and I was grateful that they let the company pay by installments. However, if the HMRC are going to come over and take all my stuff when I'm playing by their rules, I'm out.

The software I write for KennettNet? It's mine, not the company's. I gave the company a license to develop and sell my intellectual property and make a profit from it for free, on the basis that anything they develop (code, images, names, everything) belonged to me. Since finances are tight at the moment, and most of its income is settling liabilities generated when things were at their worst, revoking that license would make KennettNet go bust in less than a week — then I could license that IP to someone else. KennettNet Sverige AB, perhaps?

It was tempting to pull that switch when things got hairy last year, but I'm not that guy. Really — all I want is to pay back my liability in a way that'll allow me to pay it all back. I'm trying so hard, but I can't seem to get it into the HMRC's thick skulls that demanding the whole amount will cause them to get nothing.

Let's hope they see sense and let me settle my liability properly, hmm?