With the announcement of the Mac App Store, one framework has been causing lots of trouble for a lot of people: Sparkle. Sparkle is a framework that implements automatic updating, and is awesome — therefore, everyone uses it. However, it directly violates the App Store rule stating that you’re not allowed to do your own updating. I made a new build configuration that defined an “App Store build” build variable, then had the App Store build hide those parts of the UI from users and disable Sparkle’s checking. Unfortunately, this wasn’t enough!

The trick for this isn’t to remove Sparkle from the App Store build — it’s to add Sparkle to the non-App Store build. The problem here isn’t the framework itself — simply create a new Target for your application that doesn’t include it. More tricky is managing UI — to do this, I made a little helper class to keep things simple for my applications that may want to use Sparkle and have a separate version for the App Store.

My technique moves all of the application’s self-updating UI into a separate nib file, which is controlled by my helper class, a subclass of NSViewController: 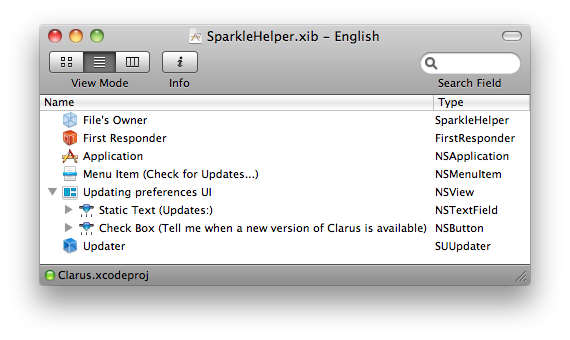 As for the helper class, allow me to present the simplest sample code ever:

All this does is check if the SUUpdater class, used by Sparkle, exists. If it does, it loads the nib file containing my “Check for Updates…” menu item into an IBOutlet and the chunk of UI to be placed into the Preferences window into the view controller’s view property. Below is code copied and pasted from Clarus itself — applicationMenu is an IBOutlet to the Application menu, and updatesView is an IBOutlet to a view in the Preferences window that should contain the self-updating UI.

This technique will avoid having to use compile-time #ifdefs to change the behaviour of the application. Simply create a target that doesn’t include the Sparkle framework and the little helper class will do the rest. This is an incredibly simple technique, but it saves a fair amount of effort if you ever have to do this more than once.

We’ve all had it. A new operating system version comes out, and we’d really love to support X or Y new user feature in our applications. However, what about our customers on older systems? Depending on your userbase and attitude, this might not be an issue. However, if you’ve a really large userbase, even the 5% or whatever who are still on Mac OS X makes up a large number of people I’d like to keep happy.

The standard technique, in Xcode at least, is to set your Base SDK to (say) Mac OS 10.6, and your Deployment Target to (say) Mac OS 10.4. That way, your app will run on 10.4 but the compiler will let you write code for 10.6 as long as you’re careful about what you use when.

Personally, I’ve never been a huge fan of this approach. It works absolutely fine, but you’re pretty much on your own on when it comes to defending against calling a new API on an older OS version. You can do all the -respondsToSelector: and NSClassFromStrings you like, but I’m always scared I’ll miss something and crash.

Clarus uses one specific Mac OS 10.6-only feature: the Image Capture API, which provides views for viewing and importing images directly from a camera or scanner.

To achieve this, Clarus has both its Base SDK and Deployment Target to Mac OS 10.5. However, it has a separate target with Base SDKandDeployment Target set to Mac OS X 10.6, which is compiled into a bundle and embedded in the Clarus application. This allows me to have the compiler defend against using 10.6 APIs in the main application while having a place I can write 10.6 code without restrictions or checks all the time.

If you try to load this bundle in Mac OS 10.5, you’ll get a nil bundle and an error in the Console, so it’s dead easy to check for. Since spewing stuff into the user’s console is bad (I’m looking at you, Steam), you might like to put minimum/maximum OS versions in the bundle’s Info.plist and check them before attempting to load.

In code, this can then be used as needed. For example, Clarus attempts to load all the embedded bundles present, and maintains a list of these internally. When a piece of code, it can do a simple check and alter the UI as needed:

Neither of these techniques are new or special. However, they work very well for dealing with “optional” code in your application, which you’ll need to do if you want your application to be distributed using multiple methods, or if you want to support multiple operating system versions intelligently.