Note: This is full-on, hardcore Computer Science right here. If you’re here to read about my cute doggie or how I’m the best boyfriend ever, this post isn’t for you.

Head over to the KNKVC page of my company’s site to download it.

I’m an Objective-C/Cocoa programmer by heart, but because of my job I also regularly program on Windows. Now, since I’m a Mac developer you’re probably expecting me to harp on about how Windows programming is soul-destroying and crappy and blah blah blah. Well, no. If you’re doing the right kind of programming, it’s exciting and interesting no matter what platform you code on. In fact, if anything the satisfaction of coding something awesome on Windows has a greater feeling of accomplishment at the end because the bar is set so low in the Windows software field. When do you something truly great it stands head and shoulders above the rest. My favourite kind of programming is framework programming. Designing a component outside of the complexities of a whole application allows you to design beautiful, clean APIs and components. In fact, every single application I write or am a part of writing ends up shipping in components. Music Rescue for Windows, for instance, has a library for talking to iPods which I wrote, a library containing user interface controls which I wrote and the application (which my colleague wrote) imports them both and assembles it all together into an application.

When I first started working in .NET, it became very clear very quickly that it wouldn’t be as easy as the Mac version. The main problem being the the built-in table control is absolutely terrible, and Music Rescue is pretty much all tables. Every time I saw something I disliked in .NET, I’d exclaim “Cocoa does this much better!”. Some of the time is was down to preference, but others (like the table) the .NET version simply wouldn’t do. Eventually, I started implementing bits of Cocoa in .NET. First came the token field, then the table view and its supporting classes (cells, columns, etc etc). One of the greatest things in the Cocoa Framework, though, is Key-Value Coding (KVC) and Key-Value Observing (KVO). Key-Value Coding allows you to get and set values of objects without actually caring what they are. It provides nifty little features when combined with arrays and dictionaries. Say you have an array of chairs. Want a list of the chairs’ colours? chairArray.valueForKey("colour"); gets you that list. Key-Value Observing allows you to be notified when a property of a particular object is changed. For example, if you want to know when the number of legs your chair has changes (perhaps one breaks off?), add yourself as an observer to the legs property of the chair and you’ll automatically be told when that value changes. This is an amazingtool if used properly, and severely reduces coupling. In fact, Key-Value Observing has made the model so separate from the rest of the app in Clarus, the entire model is in a separate assembly and I don’t subclass once in the application.

How does it work? Magic, right? 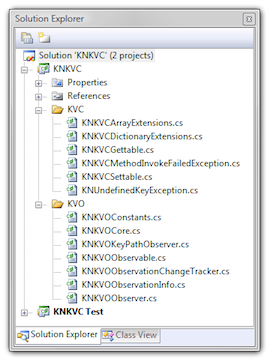 Three things made me attempt to implement KVC/O in .NET…

First, KVC. KVC is pretty easy to implement, to be honest, and the entire KVC system is only around 400 lines of C#. I declare a couple of extension classes to the Object - one for getting and the other for setting, just to keep it separate. When you call valueForKey, it simply uses System.Reflection to look for a property for that key and invokes the getter to retrieve the value. If a property isn’t found, we look for a method that returns a value with the same name as the key. If that doesn’t work, we call valueForUndefinedKey to throw an exception or do whatever custom logic subclasses might want to do. Setting is more or less the same story, but if a property can’t be found we look for a method called set<Key> that takes a single parameter and call that. Finally, I implement a few specific extension methods for arrays and dictionaries to get that juicy feature set I was speaking about.

KVO is harder and more complex. The line count isn’t much higher - around 440 lines of C# but they’re 440 hardcore lines, unlike the KVC implementation that’s mostly full of null checking. Unfortunately, it’s not simple enough to describe succinctly with words. Allow me to present… a diagram: 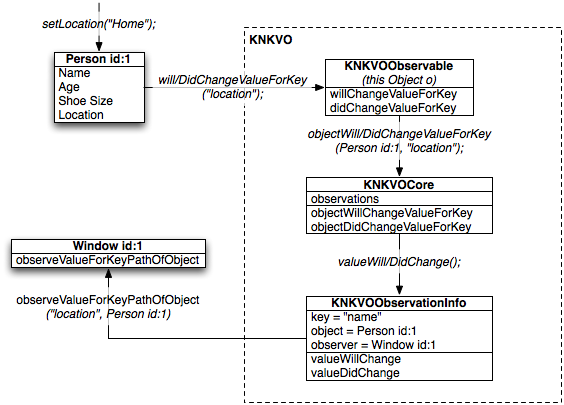 At the moment, this is all very simple. However, it gets complicated when we start dealing with key paths. A key path is a trail through an object tree, and look very much like dot notation in Java or C# or whatever. So, let’s say we want to observe house.kitchen.drawer.utensilCount. Easy, right? We just valueForKey our way down to drawer and observe utensilCount, right? Fine, but what happens if someone else says kitchen.drawer = new drawer()? Suddenly, the drawer instance we’re observing isn’t the same as house.kitchen.drawer, and our observation is now either observing the wrong thing, or observing nothing since memory management deallocated the object. What we need to do is observe every single step of the key path for changes, and when items change, remove the observer from the old value and add it to the new one. All this happens under the hood since the client doesn’t care about what kitchen the house has, or what drawer it has - just how many utensils are in the house’s kitchen’s drawer. Enter KNKVOKeyPathObserver. When the client wants to observer a key path, KNKVOCore creates one of these bad boys instead of an ObservationInfo. The KeyPathObserver then runs through the key path, observing each part of the path on the relevant object, for which KNKVOCore creates an ObservationInfo as discussed before. When it receives a change notification from any of its objects, it removes its observers from the entire tree of old objects and adds new observers to the new tree, sending change notifications back to the original observer as needed.

Up until now we’ve been assuming that KNKVOCore can get notifications just before and after properties of objects change. This isn’t so easy in C#.NET. The Cocoa version of KVO allows you to manually specify when you’re going to change a value:

I’ve implemented this in my version as well, so currently properties have to do a similar thing to get noticed by KVOCore. Which is totally lame, since I can’t modify all the properties in existing .NET classes. The next solution is to add those will/didChange… calls into the setValueForKey methods. This is less lame because I can call setValueForKey on anything. However, all the other classes aren’t going to use those, so I can only observe when I change they keys, which is dumb since I know that the value changed, because I just changed it. See?

The next solution is to get clever with Reflection.Emit. Using Reflection.Emit allows you to dynamically override methods, but unfortunately you have to create a dynamic subclass to do so, rendering this approach useless as well - I want auto-KVO on existing instances, not new ones. Next, we find PostSharp. PostSharp is an aspect-based framework, allowing the injection of methods that get called just before and just after the target method. This is perfect! Unfortunately, PostSharp does this either on compile or load time, meaning we can’t do it dynamically at run time. Damnit!

…and that’s it. I’ve now run out of solutions. Microsoft are currently testing .NET 4.0, which promises more dynamic…ness, including dynamic dispatch. Hopefully that’ll allow me to implement automatic KVO, but since I’d like to release the next update to my app before the end of 2010 I might be using manual KVO in my next .NET project (Music Rescue 5.0).

Well, I release some code, of course! Although it’s not working as automatically as I’d like, this has been a great technical exercise, and one of the most difficult problems I’ve tackled in programming - especially the implementation details of observing a key path. I’ve learned how KNO isn’t actually magic, and although I doubt my implementation of it is a great as the one in Cocoa, it works well enough to be useful in shipping products. Hell, this’ll be an integral part of Music Rescue 5.0, automatic or not! You can find the KNKVO code and documentation over at the open-source section of my company’s website.