Finally, a holiday. Last weekend (5th - 8th of April) we loaded up the C30 with three bikes, three people and three lots of luggage for a cycling trip to the Nürburgring.

Stuart arrived in his Skyline the night before and slept on the sofa. The next morning we loaded up the car pretty much to its limit: 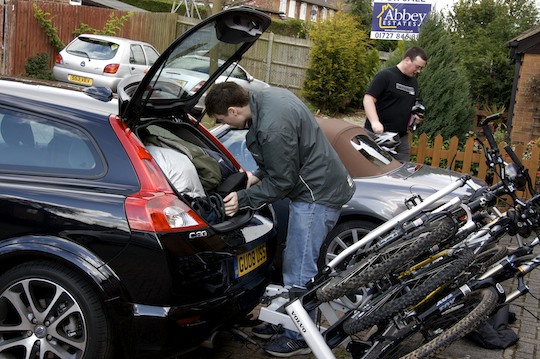 At one point, we were unsure if we’d actually be able to take all three bikes. The bike rack carries two bikes as standard and you need a little kit to allow it to carry three. Unfortunately, Volvo had recently updated the bike rack design and the dealer got the new rack and the old kit - which weren’t compatible. Fortunately, the new kit arrived a couple of days before we were due to leave.

With the car loaded, we were ready to go. 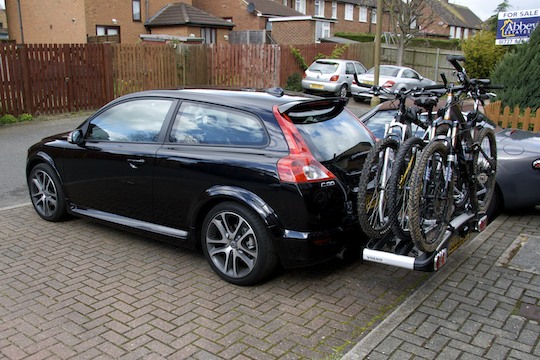 After a couple of false starts (Tim forgot his sunglasses), we were off. Being a modern Volvo, there’s not much to say about the trip - we did the 400 miles comfortably and smoothly. We got the the Eurotunnel an hour early but were put on an earlier train than booked, so everything went smoothly in that respect too. When we arrived in Nürburg it was dark, so we put everything away and went for dinner in the Pistenklaus.

The next morning, SNOW! 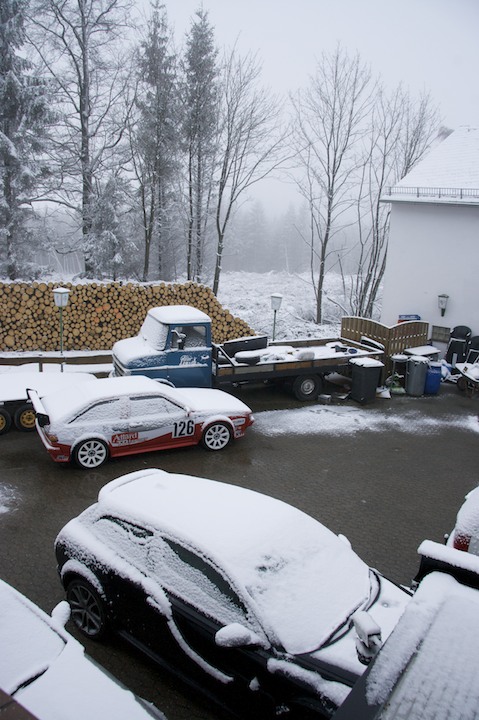 Fortunately we’d paid attention to the weather forecast and had packed accordingly. We started at the lowest point of the track and went immediately up past the Karussell to the highest point as this was the simplest (i.e., least technical) route up. It was very hard, and after coming off the bike by being retarded with my SPDs, I got off and started to push - which was the absolute worst thing I could have done. This set the theme for the whole 15 mile ride - any time we came to a steep-ish hill, I got off and pushed. Not good. 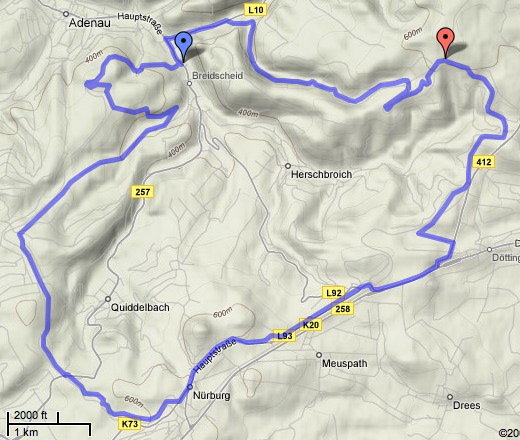 The map above shows our (rough) route. The blue point is the lowest point of the route, the red the highest. We started at the blue point and went clockwise, stopping for regular breaks. 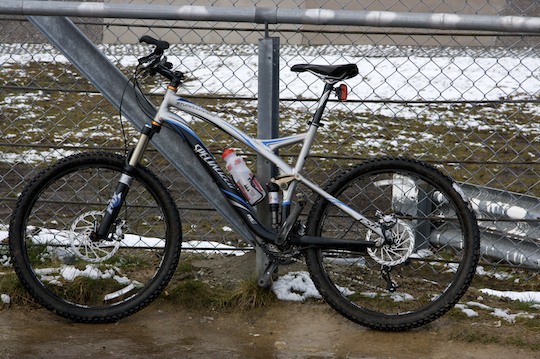 When we got to the top, I was somewhat tired… 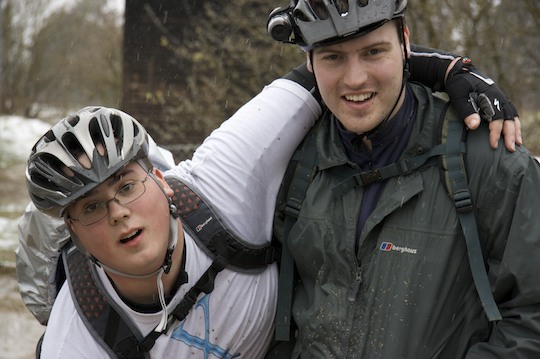 After this, it eased up a bit. There were a few technical downhill sections before we got to the road which we had to follow for a bit. The technical sections made me start enjoying the ride, and despite the fact I was knackered and it was cold and wet, I was having a whale of a time through the technical forests (roots galore) and fast tracks (full of puddles). 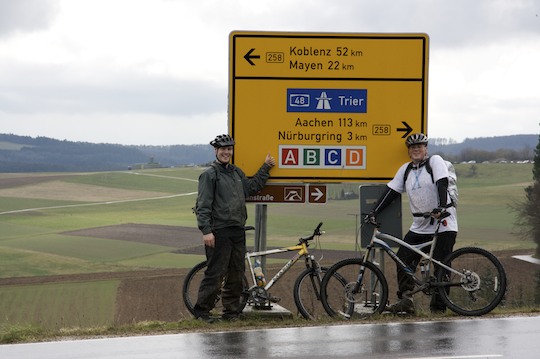 The second half of the circuit was more downhill. Unfortunately we got a bit lost and ended up going up more hills than we had to, then got lost in the forest. Finally, we got to the part I was most looking forward to - a fairly long technical section full of roots, mud and rocks down from Kallenhard back to Adenau. Unfortunately we’ve no photos of this section since we were enjoying riding it so much.

At the bottom, we’d finished. Despite my objections, Tim decided to follow Stuart down the stairs on my bike, and came off rather spectacularly trying to avoid someone walking up the stairs, kicking me in the head and throwing my bike down a set of concrete stairs in the process.

The were quite muddy, and so were we. We decided to load the bikes onto the car and go to the pressure washer. 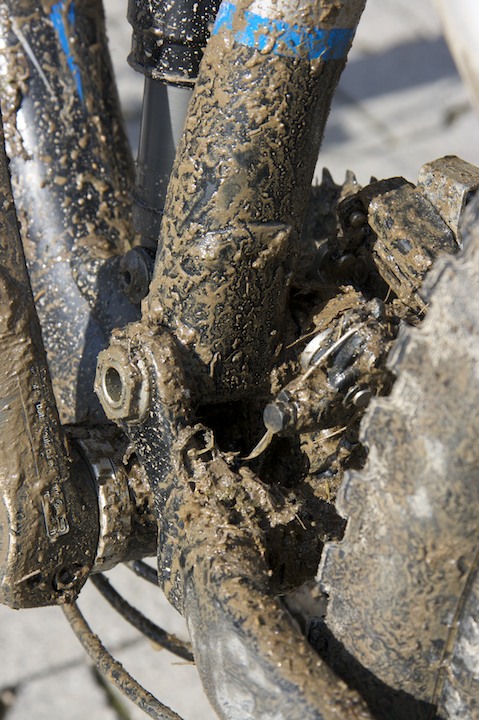 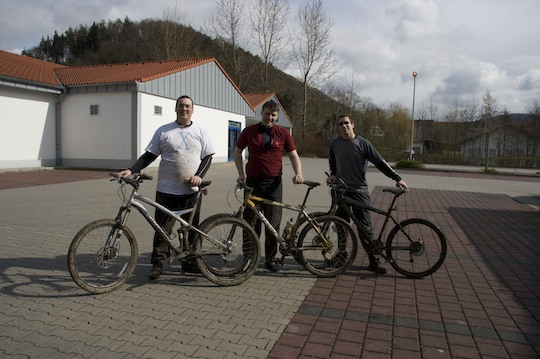 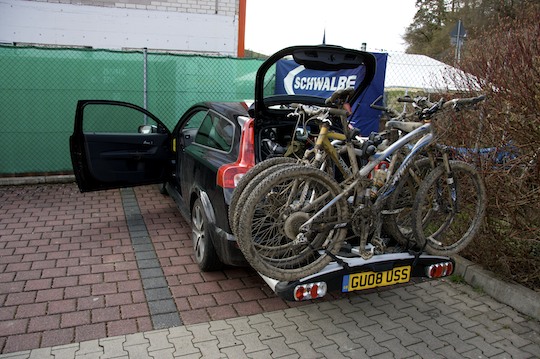 Once we arrived, we unloaded the bikes and washed them and the car, spending four euros in the process. Still, it was fun and the bikes got cleaned quite thoroughly… 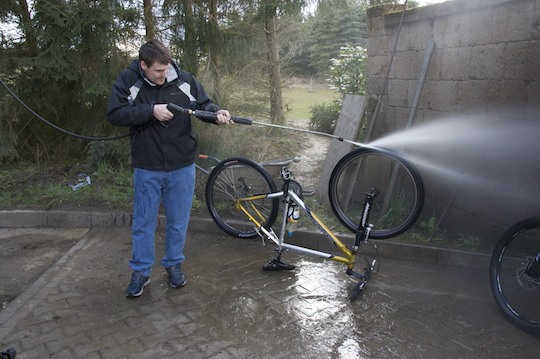 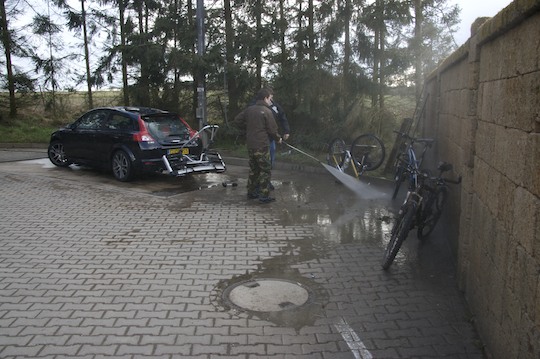 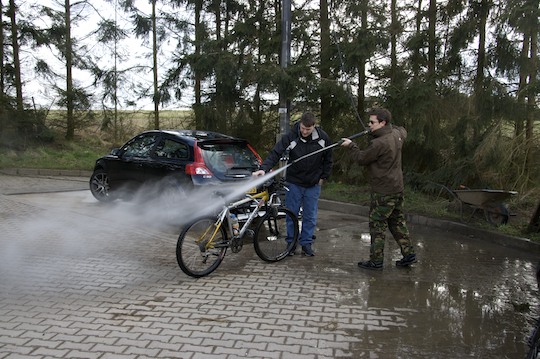 Then, tired, we took the bikes back to the hotel and went for dinner then an early night. We’d decided that the uphill stretch we’d done was far too awesome to not go the other way and descend down it.

Next morning, everyone wanted to ride again. I was feeling knackered and slightly apprehensive, which was further reinforced when it almost killed me just to ride a few hundred metres up a hill so slight it was essentially level. 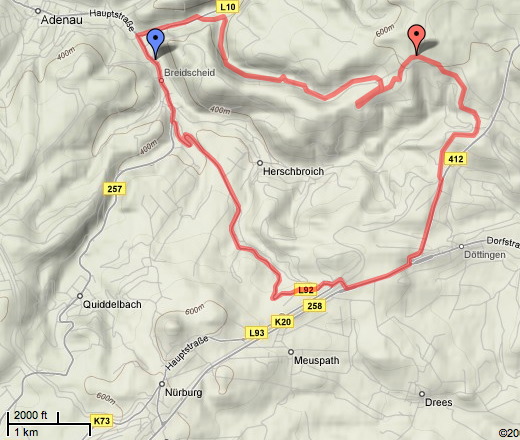 The route we took this time was shorter, but a lot steeper. Again, we started at the blue point but this time we went anti-clockwise, up the L92. At the start it felt much harder than the day before, and I was convinced that I wasn’t going to make it. However, I stuck at it in the easiest gear and managed to cycle the entire route without pushing once. I had plenty of rests, but I cycled the whole way - which I was very pleased with. There aren’t as many photos this time because Tim and Stuart didn’t spend as long waiting for me, but we did stop to take photos of Stuart descending a storm drain: 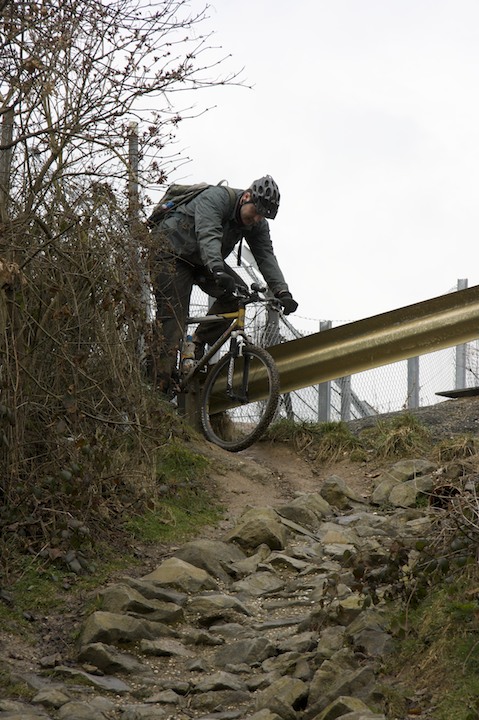 Once we got to the highest point again, it was descent time. The section between the top and the Karussell had very loose ground and lots of roots and I lost it on the way down, but managed to stay vertical. From the Karussell, it was perhaps the trickiest section of the trip. The track is fast and rocky, but not as rocky as the downhill section the day before - however, it was wide and fast, and you really had to be paying attention to stay on and it shook the bike so much it hurt to hold on!

At the bottom of the run Stuart crashed into nothing (brakes didn’t work, then worked very well causing a wheel to lock up), losing his “I didn’t come off my bike” bragging rights. Due to the speed of the section, we actually got muddier this time around: 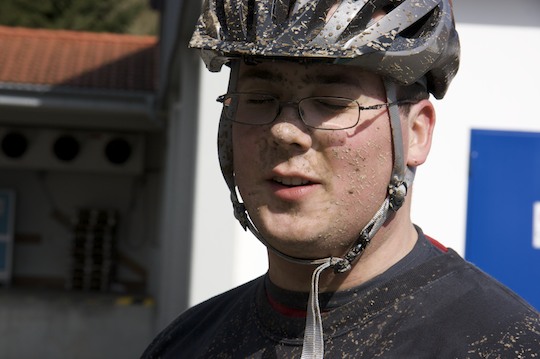 Then, I realised that we’d been at the Nürburgring for three days and I hadn’t put the car round! A quick trip to the hotel via the pressure washer again and we took the C30 for a couple of laps around the circuit: 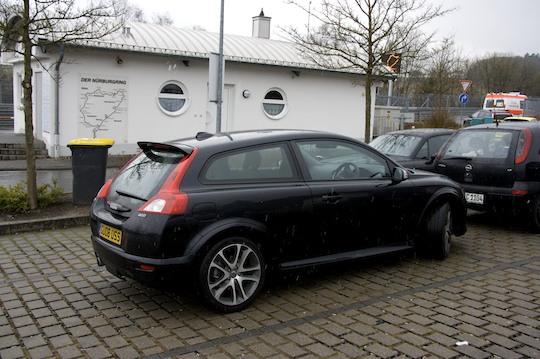 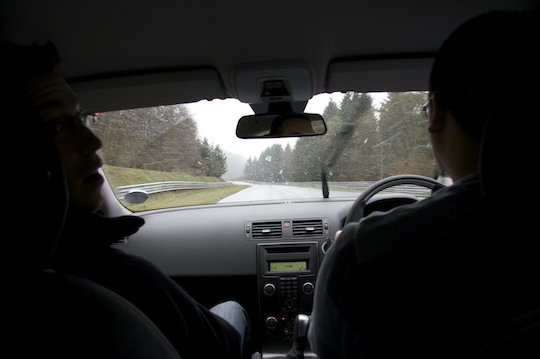 And that was the end of the trip, really. After the laps we went for dinner at the Pistenklaus again, then packed up and went home the next morning.

Of course, I put a ‘ring sticker on the Volvo. Stuart wanted to put a sticker on his Skyline, but throughout the entire trip Tim and I were fighting with him - his Skyline hasn’t gone around the track, so it’s not allowed a sticker! His bike is, though… 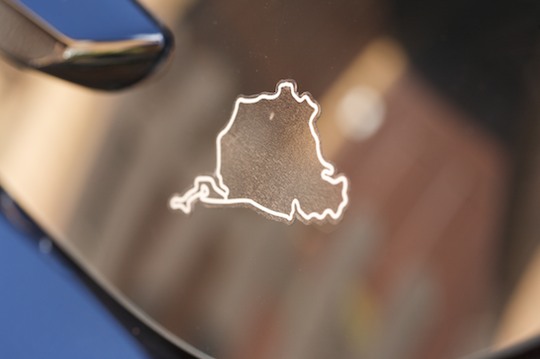