I’m not patriotic about this country at all - at least not in a traditional sense. I believe the you can’t have a true democracy and a monarchy (no matter how emblematic they are nowadays), and that while the British Empire was once great, times have changed and we should move on - public money can be spent on better things.

What I am proud of this country for, and I truly believe that makes this country great, is the BBC. It puts all other television and radio to shame - especially American TV. For a measly £135 a year, you get unlimited advert-free access to arguably the best programming in the world.

What makes the BBC so great? It’s because its sole purpose is to make the best programming possible. Not to make a profit, not to serve shareholders, and not to please advertisers. The BBC is bound by a charter that regulates it - and that charter essentially states that the BBC exists to serve the public. One particular thing I enjoy about it are the guidelines on impartiality - something we Brits don’t understand fully until we visit America and experience some of the “news” channels there.

Anyway! The point of my post is that someone, very recently, was allowed into the decision making seat at the BBC and managed to very seriously screw up two of my favourite channels - BBC Three and BBC HD.

BBC Three is pretty cool, and it had a very nice ident going on - simple, but humorous. The idea is that little plastic ‘blobs’ act out famous little clips from TV shows, films, etc, but with special ones for special occasions (Glastonbury, for example). The little critters really warmed on you!

Here’s a compilation of a few of them:

… and an official image: 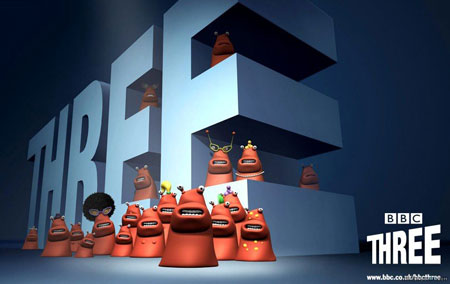 The recently had a rebrand, however - and now its all neon colours and ‘hip’ things. Not warming at all! 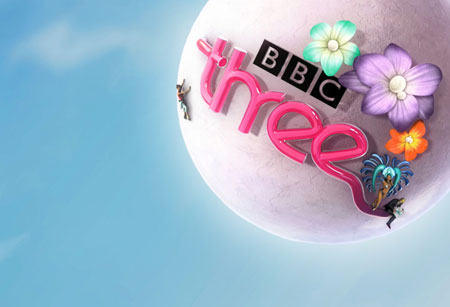 I really don’t like the new image at all. As we’re going over to DVB, perhaps they’re changing the image to attract younger people as more and more people can view these digital channels. Perhaps I’m just getting too old to get what the kids are into these days?

Until very recently, BBC HD has just been a ‘test’ channel, which means it doesn’t show a lot of stuff and is merely meant as a technical demo to convince whoever regulates the BBC that its worth it ((Good news - they were convinced, and BBC HD is becoming a full channel!)).

This meant that the BBC pulled their sleeves up in the tech department. The quality of the channel is amazing - far outpassing the efforts from Sky HD et al - they broadcast in h.264 at a very high bitrate.

For the ident, they went all out. I can’t find a video online, but the ident starts with a swooshy thing: 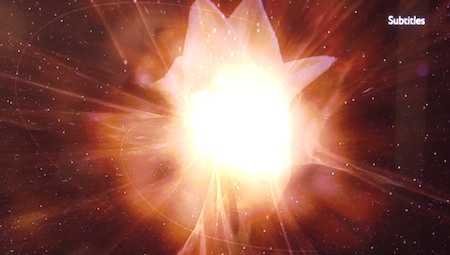 … which then explodes into a billion little glass pieces: 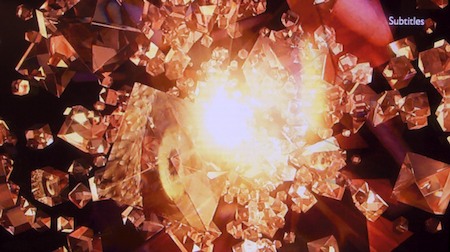 At the same time, it seems that there’s a noise attached to each little shard in surround sound space, so you can hear the shards going past and around you.

Now, they’ve overlaid horrible music on top. Booo! Bring back the awesomeness! I’m so annoyed, I might even record the audio from the old and new ones to demonstrate!