When on a bikeride with Stuart, he started doing daft things. Some of them were quite cool, and one of us said, “Wouldn’t it be cool if we could video this?” Both of us thought it was a great idea, but we didn’t have a video camera. Oh well, dream over. Then, something hit me.

I realised that I had an iSight camera. And a 12” PowerBook. We’d attach the iSight to my helmet, put the PowerBook in my backpack and voila! Instant HelmetCam.

First, we needed to make sure that the PowerBook wouldn’t go to sleep when we shut it to put it in my bag. There is a way to do this, but you need an input device, a screen and a power supply screen attached. The input device was ok - a little mouse - and a VGA-DVI adapter would fool it into thinking a monitor was attached. The problem was the power supply. That idea failed.

I looked on the internet and found a little program to stop the machine falling asleep. Two problems with that: it didn’t support my computer, and even if it did, the computer would panic and switch itself off after 4 minutes when it couldn’t sleep. That idea failed too.

Then, we turned to foam, coins, a can lid and masking tape. We wouldn’t try to force it not to sleep, we’d just wedge it open a bit so it didn’t try. Perfect! 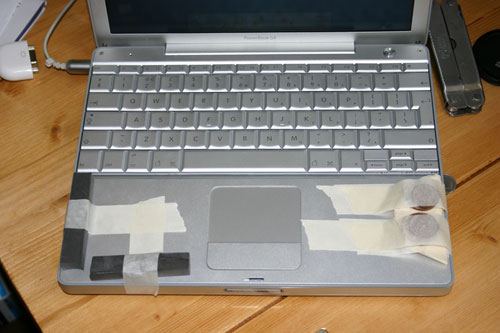 Ok, now for mounting the camera on the helmet. This actually proved very easy, thanks to the mounts that came with iSight. We used the desk-mounted one and it fit inside the helmet very well, which was really lucky. A couple of cable-ties kept it in place. Notice the tape around the fixing - this is to make sure the iSight won’t come off at 20+mph! The right-most picture is of the inside of the helmet - the round base of the mount fit really snugly in there, and you can’t feel it at all when wearing it.

The one thing that surprised me was how sturdy it was. Once the base was in place, it didn’t move a bit. This was looking promising. Everything else just fit into place. The firewire cable neatly came down the mount, along a groove in the inside of the helmet and down behind my head towards the backpack. It’s now assembled and ready to roll. 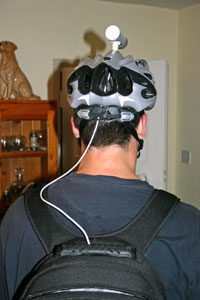 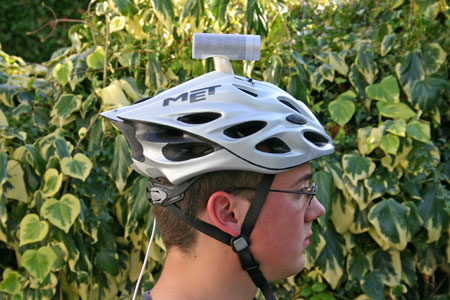 Before we take it out, lets do a little math. Ever played Burnout? If you have, you’ll be familiar with crash damage. Let’s add that up…

… and that’s not including the extras on my bike and things like that. If I crash, it’ll be expensive.

So… off I went. And it worked! Really well! Using iMovie to record the stream from the iSight, we got loads of cool footage. No video online yet, but here’s some screen grabs:

All in all, a successful experiment!