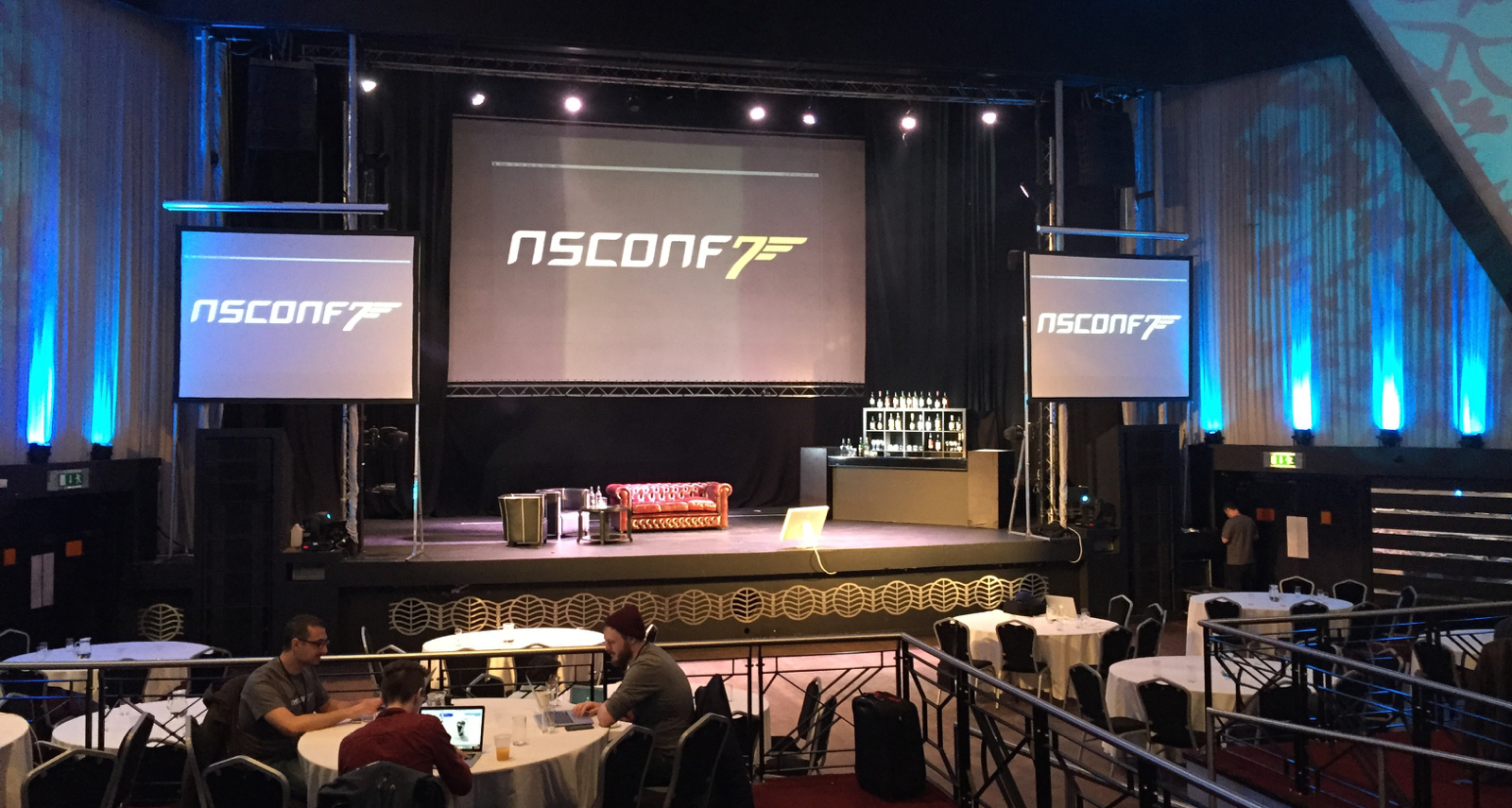 “I checked the version of your presentation with the video in it, and it works fine. Shall we just use that one, then?”

Panic set in, again. Scotty was already onstage and in the process of introducing me, so I had to think fast. I’d been accepted to give a “blitz talk” — that is, a short, 10-minute long presentation — at NSConference this year, and I’d put a little video clip that at best could be described as “stupid” into my slides. I thought it was funny, but I was so worried that it’d be met with a stony silence by the hundreds of attendees that I’d also provided a copy without the video.

At least it’ll be an interesting story to tell, I thought to myself, and confirmed that I’ll use the version with the video before stepping out into the blinding lights of the stage.

NSConference has always been about community. I’ve been fortunate enough to attend a number of them over the years, following it around the UK from Hatfield to Reading to Leicester. I’ve met a number of friends there, and it’s always inspiring. The mix of sessions normally has a fairly even distribution of technical and social topics, and this year was no exception — some fantastic speakers gave some wonderfully inspiring talks that really touched close to home, and others gave some fascinating technical talks on the old and the new.

Rather than list them now, I’m going to do a followup post when the NSConference videos are released that’ll link to my favourite talks and discuss why I found them so great.

However, the talks are only half of it. I’m pretty shy around new people, and my typical conference strategy is to sit with people I already know during the day, then hide in a corner or my hotel room during the evenings. This time, however, I was determined to at least try to make friends, and with little effort I found myself speaking to so many new people I can barely remember them all. Everyone was so friendly and so supportive, and I had a huge number of really interesting conversations with people from all over the world.

A joke is a great way to break the ice, someone once said. I start with “The lunches aren’t so light if you go back for thirds, are they?”1, referencing the fact we were given a light lunch that day in preparation for the banquet later. Sensible chuckle from the audience. Alright, maybe my video won’t flop after all!

“Hello everyone,” I continued, “My name is Daniel and for the past four years I’ve been working as a Mac and iOS developer at Spotify. And four days ago — last Thursday — I left to become an Indie developer. Today, I’m—”

I was interrupted by a huge round of applause that went on long enough to mask my stunned silence. This is what NSConference is about: hundreds of friends and strangers coming together to support one another in whatever we’re doing. One of the larger challenges in what I’m doing is the solitude — I left a job where I’m interacting with a lot of people every day to one where I sit alone in a corner of my house. As I stand on the stage, the applause lifts me up and drives home that while I may physically be on my own, I have a huge community of peers that are right behind me and are willing me to succeed.

As the applause dies down, I do a “Thank you, goodnight!” joke to move around the stage and regain my composure. Thirty seconds later, we arrive at my stupid video.

My thumb hovers over the button to advance the slide and start the video. If I double-click it, it’ll skip the video! A moment’s hesitation…

That two second video clip got what I think was one of the biggest laughs of the conference, and I was so relieved I even started laughing at it myself.

Right! Time to get my shit together — I’m supposed to be sharing information!

At the end of the conference, heartfelt things were said onstage as the sun set on the final NSConference — there wasn’t a dry eye in the house. During this, staff handed a glass of whiskey to every single person in the audience. At the very end, Scotty held a toast, then left the stage as we clinked glasses.

The last NSConference came to a close with the sound of hundreds of people clinking glasses in toast to seven years of incredible experiences. The sound resonated around the hall for a number of minutes before eventually subsiding, and is something I’ll never forget.

As a tribute to the conference and the work the organisers put in, the community is banding together to raise money for Scotty’s favourite cause, Water.org, which has the goal of providing clean water to everyone who needs it. You can donate at the NSConference 7 fundraiser page. 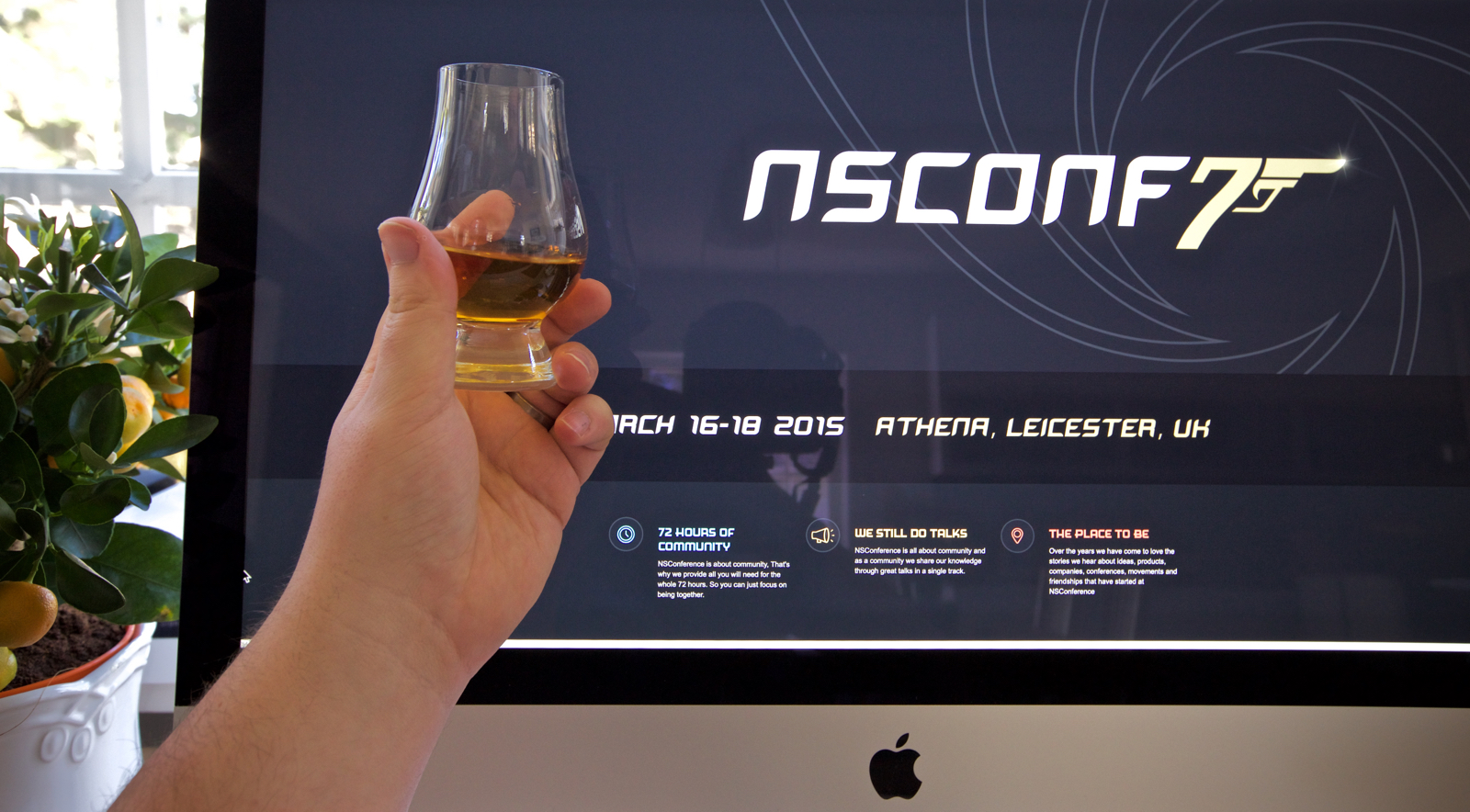