Well over a year ago, I blogged about starting a project in which I replace a radio-controlled car’s guts with an Arduino and have it be able to navigate to a given GPS location.

Well, that project is finally underway.

It very quickly became apparent that an Arduino wouldn’t cut it for the kind of computational work I want to do, mainly because of the tiny amount of RAM it has. I ended up with a pairing of a Raspberry Pi and an Arduino Uno. The Arduino’s job is to interface with the various sensors on the car and pass that information back to the Pi, which has a lot more resources for doing computation.

Note: This chapter is a fairly quick overview of how the car is put together. You can find a shopping list with exact components at the end of this post.

The Arduino has a prototype board attached to it, which on the underside has two three-pin connectors for connecting the car’s servos (one for speed, one for steering). The car’s speed controller is connected to the battery and provides the Arduino with power. There are four Ultrasonic sensors mounted on the car’s body — three at the front and one at the rear. All the cabling for these sensors end up at a pair of connectors on the inside of the roof, which allows the body to easily be separated from the chassis when needed. Leaving the body clear so you could see the electronics seemed like a good idea at the time, but instead it all looks messy and is really hard to photograph. Lesson learned!

The Arduino and prototype board are mounted inside an Arduino case that’s attached to the car’s chassis with zip ties. The case has a lid, but I’ve left it out of the photos to illustrate what goes there. The vertical posts support the body, which rests on the clips. They can be raised to give more room.

The Raspberry Pi is mated with a UI module from BitWizard, which hosts a 2x16 character LCD display, six buttons and a few breakout connectors for various serial busses. Raspberry Pi with attached UI module. The garbled character to the right of the up arrow should be a down arrow, but there seems to be a bug in my custom character code!

The Raspberry Pi connects to the Arduino twice — once for power from the Arduino and once via USB to communicate with it. When it’s all assembled, it gets rather messy! Thankfully, with the body on, it’s a lot cleaner. The final part is to find a housing for the Raspberry Pi and a place to mount it on the car itself. Here’s a diagram of how everything fits together. Clear as mud! 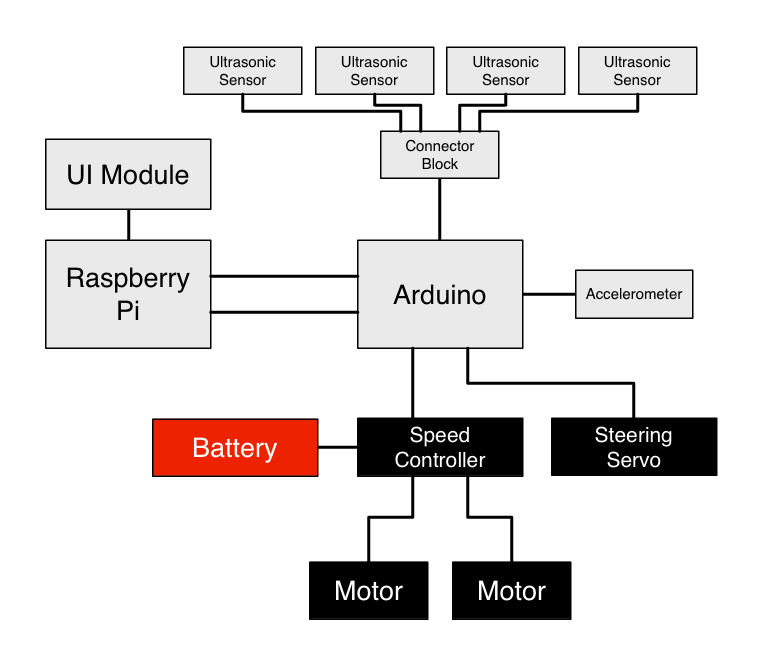 The Arduino is running a very simple loop that polls the attached sensors and writes their values out to the serial port. ACCEL: lines are accelerometer readings in G, and DISTANCE: lines are ultrasonic sensor readings in cm.

Everything so far is just enabling the main software stack of the car to observe and interact with the hardware in the car.

The main software stack is written in C# against the Mono Framework. I chose this setup because it’s pretty much the only nice Object-Oriented language available with a fully featured runtime available on multiple platforms (of course, there’s also Python and Java, but I prefer C# over those two). This setup allows me to write and debug the code on Mac OS X, then copy it over the the Raspberry Pi running Debian Linux for real-life use.

At the moment, the software stack is at the point where it’s a fully functional object model wrapping all of the implementation details of the car: 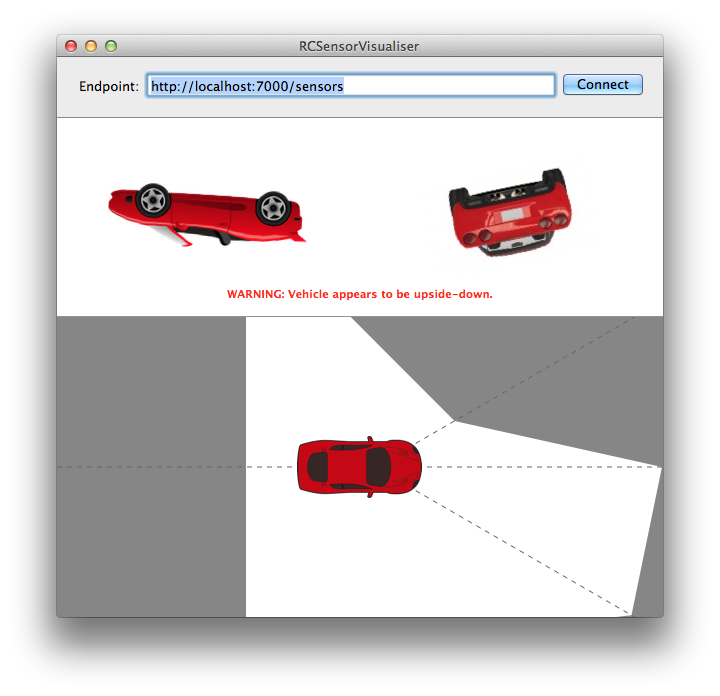 Bringing It All Together

Below is a video showing the whole lot working together. I scroll through the menus on the Raspberry Pi and observe sensor readouts as well as adjusting the steering and throttle.

The project is now ready for its next steps, which will be writing AI code to have the car navigate its surroundings. It doesn’t have GPS at the moment so it’ll be limited to “drive forwards and don’t crash into stuff” for now, but it’s a start!

You can find the code for this project over on my GitHub. It includes the Arduino Sketch, the C# software stack for the Raspberry Pi and and Objective-C Mac application for observing the sensors.

The project at the moment uses the following hardware: