Since ordering the Volvo C30 (see previous post), I’ve been thinking about the going to the Nürburgring with my bike and riding around it. The bike route is long (13 miles), very offroad and very hilly. Obviously, I’d need to prep a bit before going. On Friday, the weather was looking alright so I decided to go on a bikeride around the local area to test out my new clip-in bike shoes and base layer.

The route is mainly on the road, but goes through a small wood - which was still very muddy. I good place to test out my offroading skills, I thought. Well, it’s been a long time since I rode properly offroad - and I’ve never used clip-ins before. Sure enough, I was soon in the mud, still attached to my bike. My fault for not keeping my speed up, I guess.

Slightly further on it opened out into fields, which were so wet and muddy it was like riding though… well… deep mud. The bike actually got stuck in the boggy mess, but this time I managed to come free from the bike - with a bit too much momentum, though, and I landed in a hedge. No mud, but lots of nettles.

After that, my technique seemed to improve. I got back on to the road, but then it started to hail. Hard. Should’ve taken my helmet, really!

13 miles later, I was very wet and muddy, but I really enjoyed it. 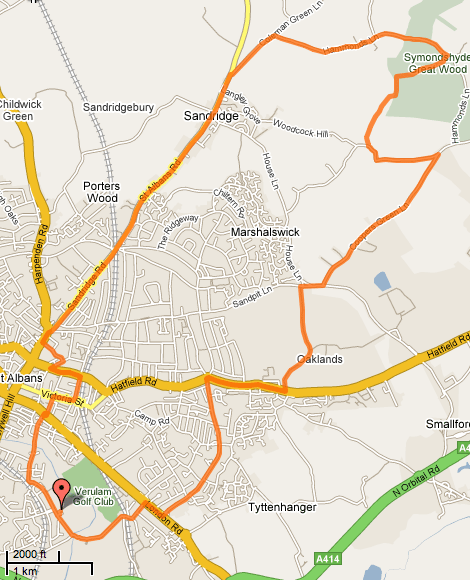 Only three weeks after getting my bike, it’s having a noticeable effect - my trousers are now too big for me, so I’ve had to buy some that are 2” smaller. I feel better, and I seem to have the stamina to do fairly gruelling trips like the one above without running out of energy or collapsing afterwards. I’m not desperately quick, but baby steps - and I think I’m almost at the level where I’d be able to ride around the Nürburgring without dying halfway around. 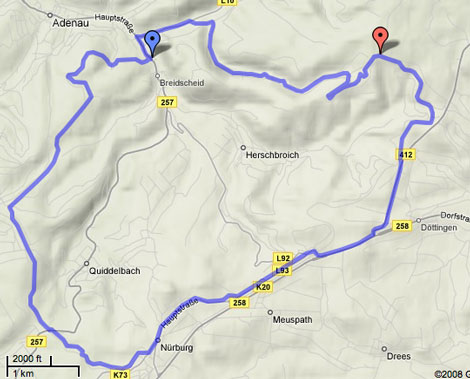 The terrain of the area makes the direction you take around the track very important. The blue marker on the map shows the lowest point of the route, and the red marker the highest. However, while the path directly between the two is fairly steep, it’s also fairly smooth - the other way is through muddy forests and rocky paths - fun on the way down, not so much on the way back!

Therefore, we’ll be starting at the lowest point, doing the smooth climb to the highest point first while we have the energy, then enjoying the downhill technical sections around the western parts of the track. I’m even planning on getting some lights and doing it again at night.

The trip is all booked now - in early April Stuart, Tim and I will be piling into the Volvo I don’t have yet for a long weekend biking around the ‘ring. Obviously, I’ll find time to nip the Volvo round, just so it can earn its sticker!