If you follow me on Twitter, it's no surprise to you that I'm moving to Sweden in a few months (if not, um… surprise!). I can't really go to live in another country without at least trying to learn the language, so my girlfriend and I are doing just that — we attend weekly Swedish lessons.

Now, I've already tried to learn a language — French. I learned it at school and my mother is French, and although when I was a kid I hated French and didn't want to learn it (something I now regret greatly), I seem to know a lot of words. However, what I can't do is properly form sentences. I'm a step above the AVEY VOU UN CUP OF TEA? level, but the French grammar more or less eludes me.

This worries me somewhat, as I'll be needing to use this on a day-to-day basis. We're doing well in the Swedish lessons, but an hour + homework a week isn't a lot of time or exposure to the language, and there's only so much you can learn by going through textbooks on your own. I really need to be learning the language I use on a day-to-day basis. However, I'm a programmer so I don't get much translatable language there, and it's not really practical to translate longer things like emails.

Then, it hit me — why not translate my Tweets? They're composed of language I use all the time and they're also nice, small, bite-sized chunks of prose, perfect for translating. So, to avoid annoying my existing followers I created a new account — iKenndacSE. The aim is to translate every tweet I write that isn't an @reply into that account.

Now, the easiest thing to do would be to paste each tweet into Google Translate then put the resulting output on Twitter. Hell, I could write a script to do that for me. However, I wouldn't learn a thing! So, here's how I do it:

1. Write the tweet down in a notebook, with a pen. No typing. This re-affirms the language you just used.

2. Translate the tweet as much as you can, leaving gaps for words you don't know or can't remember. Since I'm new to the language, there'll be a lot of gaps.

3. Translate each individual missing word using a service like Google Translate or a dictionary, and fill them in — correcting for known word structure differences with English. This allows you to see and learn individual words one at a time.

4. Check the translation as a whole using either Google Translate or my Swedish teacher. As words can change with context, the translation of the whole thing may be different to the translations of each individual word put together. This allows you to learn the intricacies and rules of the language by example.

5. Write down new words alongside their English equivalent underneath. This will eventually form a great reference to look back on and practice with.

Above is the result — half a page's work for a single tweet. However, the repetition of writing the tweet essentially three times makes the language stick in your head much more than translating it on the computer does — even if you do the same amount of work — I find typing disconnects you from the language too much to stick. 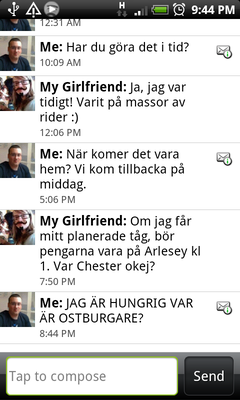 I've only been doing this for a few days, but it's already having a positive effect on my Swedish. The downside is that it now takes ten minutes to write a tweet rather than a few seconds, and it can be quite hard to do when I want to tweet from out and about.

It took me far too long to realise that SMS messages are also perfect for translating since they're just as short as tweets. However, sending Swedish to my friends isn't exactly productive, so my girlfriend and I have decided to text each other in Swedish.

Yes, I'll admit that that last one from me has a bit of the CHOCKLÅS coming through.

P.S. My girlfriend isn't really called "My Girlfriend" in my phone.