Core Data is awesome. One of the most awesome things about it is that you get free undo/redo. Of course, you wouldn’t actually ship anything but the simplest of applications with the undo Core Data provides, but getting it up to scratch it pretty simple — most of my additions in Clarus are simply putting certain operations into undo groups.

Clarus can store photos and other resources in documents, and achieves this by using a document bundle. A class, called KNBundledDocumentResourceManager, manages what’s going on:

The transient resources directory is used so we don’t fill up the document’s package with stuff until we’re absolutely sure the user wants it. This wouldn’t actually be so bad back in the day, since we could simply delete the file if it isn’t wanted later on, but now we have Spotlight and Time Machine indexing and backing up everything we do at the file level, it’s not so smart. Plus, we want the document’s package to be consistent with the saved state of the model at all times, just in case the file is copied out from under us.

For a piece about undo, I haven’t really mentioned undo much so far, have I? Well, that’s because in Clarus 1.0.x, undo and redo doesn’t quite work correctly. You can undo and redo adding and removing resources, but this doesn’t actually affect the underlying files! So, if you add a photo to your Clarus document in 1.0.x, pressing undo won’t remove the file from the resource manager and it’ll end up in your document’s package no matter what. A while back, I was listening to Matt Gemmell’s “World According to Gemmell” segment in the MDN show, and he was discussing how, basically, if you allow the user to make an unrecoverable mistake, you fail. I heartily agreed, and immediately added the following ticket into Clarus’ issue tracker:

I’m happy to say that, almost exactly one month on from that ticket being created, it’s been marked as resolved and will be included in the Clarus 1.5 release in a couple of weeks. The implementation hasn’t been as simple as I’d like, partly because of bad approaches on my part, and partly because of a few… niggles in Cocoa that ended up frustrating me somewhat:

After four hours of tedious bullshit from Cocoa, you can now undo/redo adding and deleting attached files from your document in Clarus. –iKenndac (me), on Twitter

As an aside, Geoff Pado’s response to that cheered me up no end:

@iKenndac You mean *you* can now, unless you already pushed an update? :P –Arclite, on Twitter

“I know,” I thought, “when you undo adding a photo, it’ll just remove it. Redoing will add the file again from its original location!” This is immediately a bad idea, since Clarus’ model is file ownership — once you add a file to a Clarus document, Clarus makes its own copy and you can trash the original file. Depending on you to not trash the file for undo and redo to work properly is a fairly stupid way to work.

“Fine,” I thought, “when you undo adding a photo, it’ll move it to a new place, reserved for removed items. Redoing will use the existing mechanism of adding files, and the file will end up in the transient resources queue. The existing save mechanism will move the file back to the package on save.” Under many situations, this works fine. However, imagine the following sequence:

The failing point is step 3. The document is clean, but the file isn’t in the bundle! Hitting Save again will put the file back into the bundle, but who hits Save on an unsaved document? At that point, the user can close the document without prompts and lose their file.

This is the approach Clarus 1.5 takes: Adding a photo works as in 1.0.x — the file is first put into a transient directory, then moved to the package upon save. When you remove a photo, either by undoing an add or removing it using the Clarus UI, the file is kept in the package, but is internally moved to a removed resources list. When you redo an add or undo a remove, the file is put back into the current resources list. Finally, when the user saves (or reverts), the resources in the “removed” list are moved out to the transient resources directory and put into the internal “transient removed resources” list, just in case we want them back later. Hooray! Integrity is preserved!

The implementation is actually fairly simple, as long as you take into account a few niggles. There are three methods in Clarus for adding and removing photos. The first is called by whatever has the file path of the original file to be added:

Fairly simple, right? This is what the code does:

The removePhoto:withResourceId: method is simpler:

Finally, addPhoto:withResourceId: is just as simple:

Hopefully they’re simple enough to understand without spelling it out. Ideally, this is all we’d need to work properly, right? The resource manager automatically moves a removed resource back to the correct list (transient or current) when its path is requested.

Notice that I’m passing the photo’s resourceId around alongside the photo. This seems a bit pointless since resourceId is a property of photo, right? Well, we’re wrapping another layer around Core Data’s built-in undo management, which means we get called first. This is fine when undoing, but when redoing, we get called before Core Data gets a chance to rebuild all of the data correctly. So, while we do get the original photo instance on redo, all of it’s properties are nil. Therefore, we have to keep a separate reference to the resource id throughout the process.

This isn’t actually shown in the code here, but is an artefact of how the resource manager works. The resource manager has an instance of NSBundle representing the document, and used to get paths using NSBundle’s pathForResource:ofType: method. However, it would appear that NSBundle caches the contents of the bundle. As resources are moved in an out of the resources directory, NSBundle gets out of sync pretty quickly, and -pathForResource:ofType: can return nil even though the file is most definitely, positively there. To solve this, I eventually stopped using NSBundle’s methods at all. [[bundle resourcePath] stringByAppendingPathComponent:fileName] works much better.

This approach really does require a separate controller to keep track of what goes where and when. Consider this diagram of what’s going on: 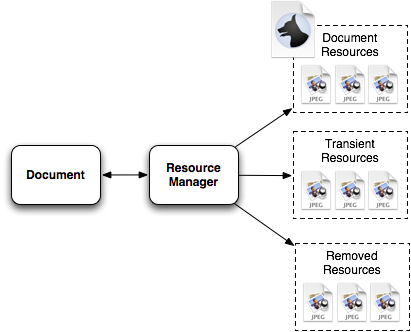 Where a resource actually is depends on four things:

My approach still has a couple of problems:

Managing files and an undo stack while at the same time making sure the document on disk keeps its integrity is a pain in the ass. I think my approach is a good one, but if you disagree (or simply have another approach), please leave a comment. The resource manager class is over 400 lines long and contains a ton of state information about which file is where, where it came from and where it should go next. Relying on the original file being there would make this a lot simpler. So would allowing the document package to be inconsistent with the model itself some of the time — let’s face it, it’s not like it’s often a user would add a file then hit undo given the lifespan of the document. However, as Mike Lee said once (paraphrased): If you don’t do a feature properly, don’t do it at all.