I first started using computers on a day-to-day basis in the late nineties, making me around thirteen. Like most thirteen year-olds, I had an active imagination and wanted to do all the cool stuff I read about in Mac magazines with Claris Homepage and Photoshop. However, also like most thirteen year-olds, I didn’t have a job, so I ended up downloading the software illegally using the now-defunct Hotline.

Even as a thirteen year-old, I didn’t like what I was doing. I was more than aware that I was stealing and hated it. In fact, if I knew that I’d use something seriously, I used to beg my parents for extra pocket money so I could save up and buy it - I remember my Mum taking me to our local Mac reseller in Alfreton to buy Mac OS 8.5 when it was released.

Nowadays, of course, I don’t own a single piece of illegally obtained software. I don’t have any software on my machines used to get illegal software/music/etc like Limewire or whatever. I’m more than willing to pay for the software I use as part of my work or hobbies, and totally understand the value in software - it’s very rare I find a piece of software I think is overpriced.

Cut to 2009, and it’s rarer and rarer that we buy boxed products. The iTunes Store has given us instant access to music, movies, TV and iPhone apps. Platforms like Steam give us near instant access to a plethora of games, and there are many other digital download stores for games. Hell, you can even download games on your Nintendo DS!

So, picture the situation. Something on TV reminds me about the firm The Girl Next Door, which it turns out my girlfriend hasn’t seen.

“Aha!” I exclaim, “Why don’t we watch it tonight? I’m sure I have it somewhere.”

A quick search of my DVD shelves yielded nothing, so I consulted my Delicious Library. Nada.

Well, now I’ve paid for the film, it’s not immoral to go and download it. So, after downloading Transmission and a quick visit to The Pirate Bay, I was in business. A quick transcode to H.264 and we were watching the film on the AppleTV.

Amazon emailed to tell me I wouldn’t get my game until after the weekend. No biggie. We were going camping, and I was looking forward to putting our brand new Party Grill to the test! However, camping got cancelled.

With a now empty weekend, I really wanted to play my game. I scoured local outlets for a copy, literally checking over ten shops in three or four towns, to no avail. Doing a bit of research, I found that recently the developers of the game recently released an official patch that removed the game’s copy protection.

So, again I visit The Pirate Bay and download a copy of the game. When I apply the patch, I find that you only need to enter the CD key to play online so I merrily played a few missions over the weekend.

Come Monday, Amazon’s delivery arrives, and I’m now the proud owner of official copies of both The Girl Next Door and The Settlers. Included in the photos are both my downloaded copy of the film (playing in iTunes) and The Settlers, on a DVD-R. 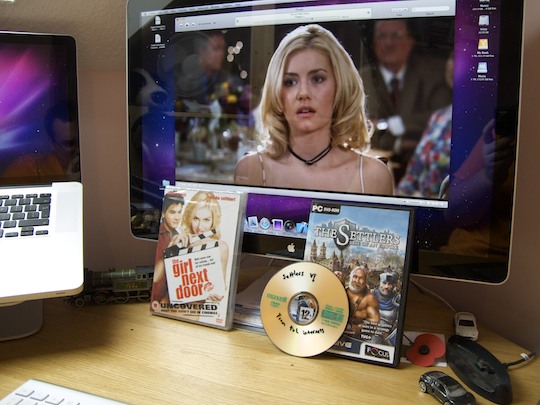 So, was what I did illegal? Obviously, morally I’ve got no problem, but if some law official was in a really bad mood, could they have a case against me? I’m not so sure…

The act of breaking DRM is illegal, i.e. ripping a DVD. I didn’t do that. However, someone else might have done so to create the copy I downloaded.

The act of breaking DRM is illegal, i.e. “cracking” a game. I didn’t do that, either. The copy protection was removed officially by the game’s creators.

It’s legal to create backup copies of your digital stuff as long as you also have a license for it. I had both a license to watch the film and play the game, as technically the licenses are transferred to me by the reseller as soon as my card is charged as part of our contract of sale. Therefore, I could absolutely (and rightly, in my opinion) claim that I was using my backups ((Although the right to have backups and the law against breaking DRM conflict with each other when backing up DVDs.)) . The only thing is, the physical discs used to make the backups aren’t the ones contained in the boxes I received.

So, what do you think? I’m not in fear of being hauled away to jail, but I’m genuinely interested in the legalities of this, especially if said law official came round during the weekend while I was playing games and watching films before the discs physically arrived.